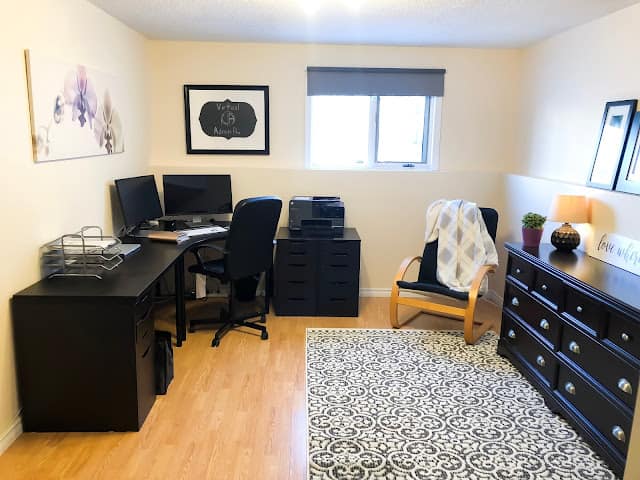 Use baskets or other storage containers to instantly take a space from messy and cluttered to clean and tidy! All sorts of things that float around without a home can be placed in a basket, bin, or box sitting on a shelf where they are still easily accessible but also out of sight.

I love doing all sorts of different things for Reclaiming Home, but one of my favourites is a Room Redesign. There is something I love about rearranging, organizing, purging, and finding treasures that a person already owns to make a room so much better than it was before. An office redesign isn’t as big and flashy as a total room overhaul with new paint and furniture and renovations, but people are always shocked at what a HUGE difference one day of hard work can make in their home.

Last week I worked with a wonderful woman named Sarah who wanted her own office redesign. She owns her own business called Virtual Admin Pro and she works from home. She spends about six hours a day in her office so she wanted it to feel more professional and welcoming. Sarah was so fun to work with! We spent five hours working on this room and we made a significant difference.

Sarah had two small desks in here from when her kids were smaller and not yet in school, where they would play while she was working. This Christmas the kids got new desks for their bedrooms, so these extra desks were no longer needed. Sarah likes a clean look without clutter, so the key to this space was closed storage. The IKEA drawers that were part of her kids’ old desks became the storage unit for everything that used to be in the open red bookcases. By putting things in drawers, we created space that was visually less cluttered. Taking the extra desks out made the room feel more spacious. Sarah already had two black frames, and to one we added a piece of chalkboard art with her business logo for a personal touch. The other we made into a dry erase board for a to-do list.

With the kids’ desks gone, we had a lot of empty space. At the beginning of each Redesign, I ask the client to show me everything they are willing to let me use from elsewhere in the house. Sarah gave me free range to use anything I wanted. In the storage room I found a dresser that was not being used. It works perfectly in the room and it creates lots of additional closed storage. It also gives her an extra surface if she needs to spread out papers for her projects. Sarah had the throw blanket in her bedroom and it went perfectly with the existing chair in this space  to add a cozy, comfortable touch.

Sarah went out shortly after lunch to buy an electrical cord and some poster board to make some of my proposed changes work. She went to Walmart to grab these items, and while she was there she started texting me additional items that she thought might work in the room. She bought the lamp, the rug, and the “love where you are” sign. The total came to $96.00. The rug makes the space so cozy. I gathered family pictures from around the house to add to this side of the room.

Now, on to the other side of the room. Sarah already owned the bookcases on either side of the door, but they looked too cluttered. Many of these items ended up in the dresser!  She also already owned some grey and white fabric bins. They now hold lots of bits and bobs that didn’t have a home before. Using the right storage container inside a bookcase helps organize your items and make your space feel clean and uncluttered.

Sarah was so wonderful to work with, and I really enjoyed my day with her. Before I came, Sarah told me she doubted she owned anything that would be useful in an office redesign. She was wrong! We found several treasures she already owned that helped bring the room to life. I hope this inspires you to look at your space in a new way.

My dream for Reclaiming Home is to make interior design available to everyone, whether you are in your forever home or your first apartment. I discover what your needs and wants are, and I create a space that works just for you.

And the really great news? We’re going to transform your home into a place you love within your budget.